You are the owner of this article.
Edit Article Add New Article
You have permission to edit this article.
Edit
Home
News
Food & Culture
Opinion
Events
Promotions
Multimedia
Digital Edition
About Us
Advertise
Donate
And More...
Share This
1 of 2 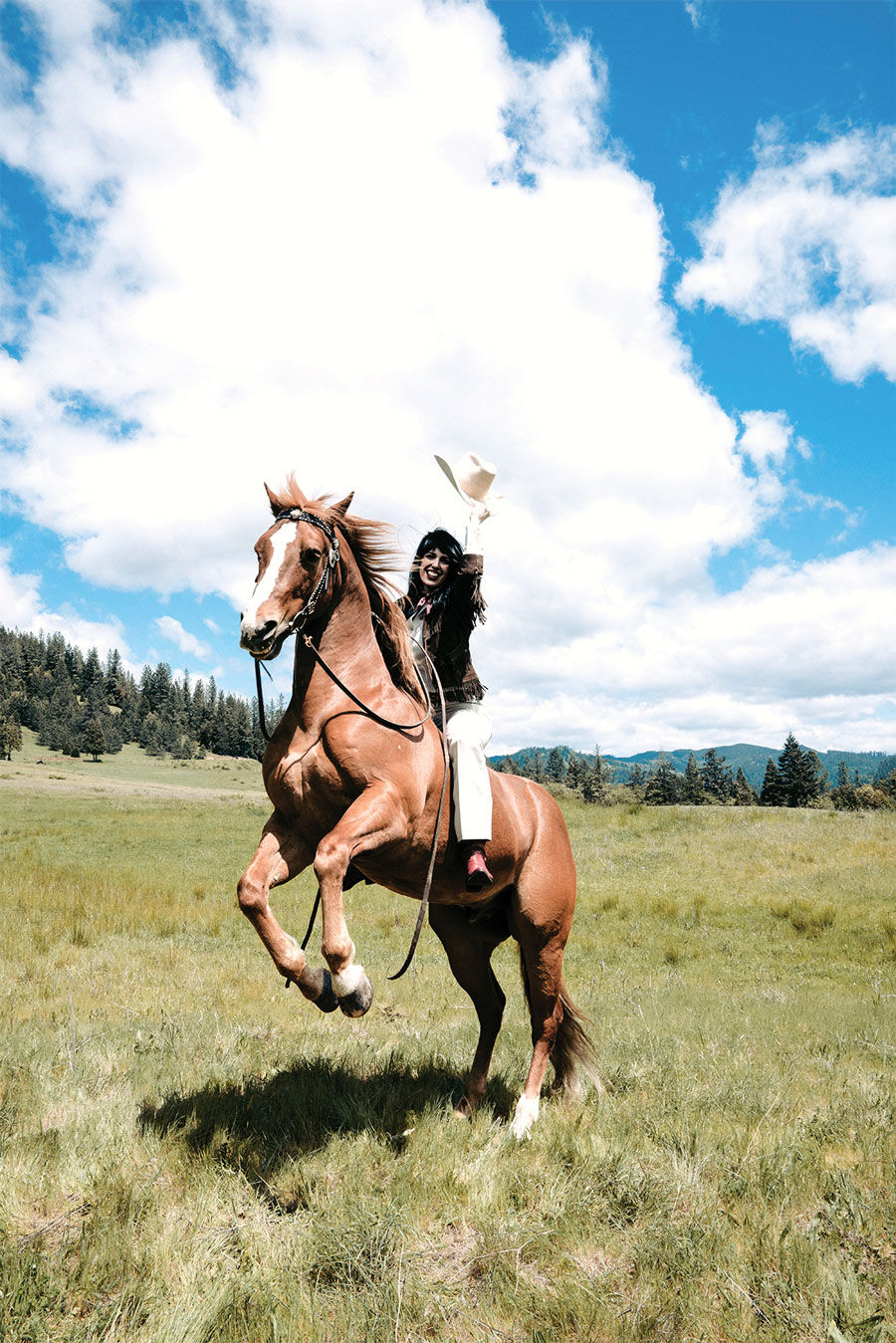 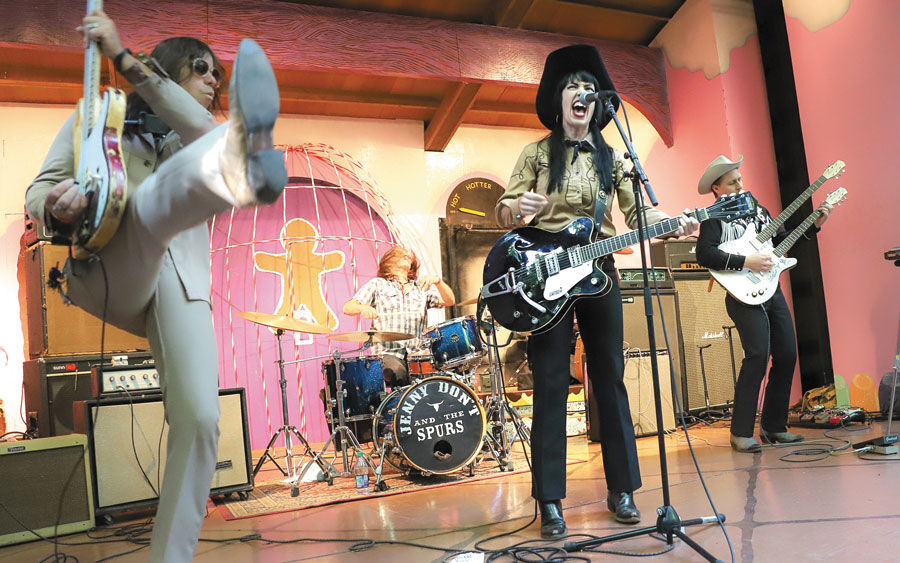 This is not Jenny Don’t & The Spurs’ first rodeo. At least, it isn’t for Jenny, a talented singer-songwriter whose alt-country band includes former members of Portland punk acts The Wipers, The Rats and Napalm Beach

“My mom was The Rodeo Queen of central Wyoming, and my grandpa trained race horses,” says the Washington native, who was eager to follow in her mother’s footsteps. “I have a sister, a brother and two half-brothers, but none of them were interested in horses at all. So my mom and I did all that stuff together.”

Jenny’s specialty was barrel racing, an event in which she rode her horse around barrels in a cloverleaf pattern. She won some competitions, but never quite made it as far as her mother did.

“I tried out for Rodeo Princess one year and I lost by one point,” she says of the near-miss that could have taken her down a very different career path. “I could still be out there,” she laughs, “the Rodeo Queen of Washington!”

As it turned out, other family members had interests that didn’t involve falling off horses. Jenny’s uncle was the longtime personal sound engineer for Reba McEntire, while her father, a pastor, played in a psychedelic Christian rock band whose music she likens to ’60s groups like Love and the Beatles.

Jenny Don’t & The Spurs, with The Flower Gospel

“I actually had to get carted around to their shows as a kid and I hated it,” she recalls with a laugh. “I was always like, ‘I’m never gonna be in a band. This is so boring.’”

It was after moving to Portland that Jenny became enamored with the local punk scene and ended up breaking her vow. Starting out as frontwoman of the more succinctly named Don’t, she tapped into her love for the music of seminal L.A. punk bands like X and the Gun Club.

“John Doe does a good job of mixing and matching genres,” she says of the X frontman. “We played with The Flesh Eaters in Portland and he was hanging out in the green room talking about how invaluable touring is — just to play music and to tour as much as you can, for as long as you can.”

All of which sounds like good advice, until it isn’t. Over the better part of a decade, Jenny Don’t & The Spurs have logged close to 500 gigs in a dozen or so countries. So two years ago, when the opportunity to do a 40-date European tour came up, she and her cohorts — bassist Kelly Halliburton, drummer Sam Henry, and lead guitarist/pedal steel player Christopher March — were all in.

He was like, ‘Your voice isn’t even singing, it’s just talking.’

The only problem was that their singer’s voice was giving out, thanks to a vocal-cord polyp that she’d spent several months trying to deal with on her own.

“It was like a year-long ordeal of trying to work around it without getting surgery,” says the singer. “I did some speech therapy to see if that could help, but they said the way that I sing is fine. The problem is that I was bartending at two different places, working doubles all the time. And I also worked at a nightclub that was like techno music. So I was having to yell over music all the time. My doctor was like, “You’re just yelling all day long, and it’s killing your voice.’”

To further complicate matters, the band was scheduled to go into the studio and record a new album before heading out to Europe. The sessions didn’t go well, and it didn’t take long for the band to realize it.

“Kelly made the call,” says Jenny. “He was like, ‘Man, this is beyond a little bit bad. Your voice isn’t even singing, it’s just talking.’ There were even parts where my voice would just be non-existent, it would just cut off. So he said, ‘Let’s just sit on this. We’ll do the tour. We won’t book anything else after that, except the surgery. And when you’re recovered, then we’ll pick back up where we left off.’”

After the tour and surgery, Jenny went back into the studio to re-record her vocals, only to find that the previous tracks no longer existed.

“They had this huge computer crash and apparently our recording was the only thing that wasn’t saved. So yeah,  we had to record everything again from scratch. I thought the rest of the band would be disappointed, but they were actually relieved. They did a better job, because they had been playing the new songs on tour. So the album now sounds a lot brighter and a lot more fun.”

True enough, Fire on the Ridge offers engaging examples of cowpunk at its near-best. Jenny hits all the high notes beautifully on “California Cowboy” and “Queen of the Desert,” while March delivers single-note guitar lines that echo Buck Owens and Ennio Morricone, with a little bit of surf music on the side.

The album’s sole cover is a worthy rendition of Bonnie Guitar’s “Johnny Vagabond,” which attests to the band’s enthusiasm for obscure country. “Live, we’re doing a cover of ‘Still as the Night’ by Sanford Clark, who unfortunately just passed away,” says Jenny. “And then we cover Johnny Bond’s ‘Three or Four Nights,’ which is fine because it showcases how fast Christopher can play guitar.”

In the band’s view, Fire on the Ridge is the first album that truly captures the spirit of their live shows. Currently, they’re out playing more than three dozen cities across the nation, after which it’s only a matter of time before they’re off to spread the gospel of country music overseas.

“When we tour in Europe, a lot of punks will come to the shows and be like, ‘What is this, you’re playing country?’ I feel like, for a lot of people, country can be questionable, because they have so many preconceived notions about it. They’re like, ‘Are they assholes? Are they racists? Are they gonna be shitty?’ But then by the end, they’re like ‘I’m not a punk, I’m a cowboy now!’”

Bill Forman is the music and film editor of the Colorado Springs Indy, as well as the former editor of Tower Pulse Magazine and news editor for the Sacramento News & Review.